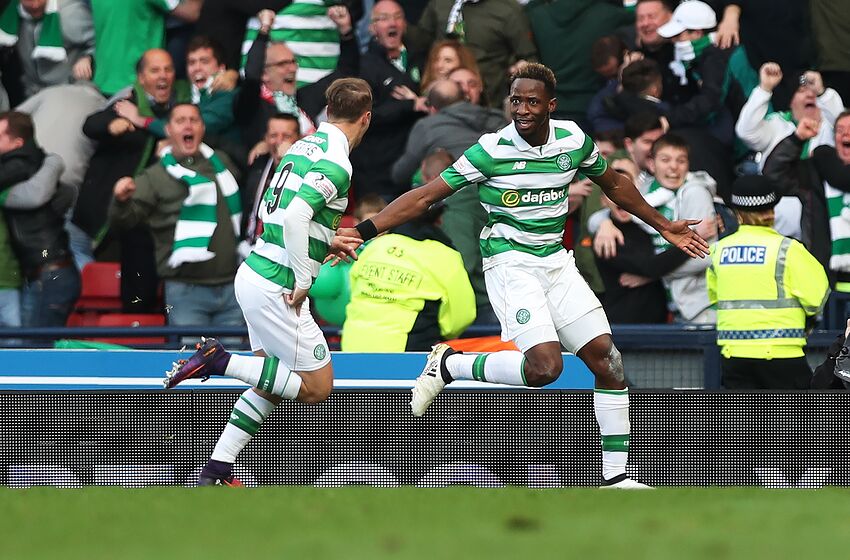 GLASGOW, SCOTLAND - OCTOBER 23: Moussa Dembele of Celtic celebrates with Leigh Griffiths of Celtic after he scores through the legs of Matt Gilks of Rangers during the Betfred Cup Semi Final match between Rangers and Celtic at Hampden Park on October 23, 2016 in Glasgow, Scotland. (Photo by Ian MacNicol/Getty Images)

Celtic continue its long run through the Scottish Premiership in the moth of December with a visit from Hamilton Academical on Tuesday night at Paradise.

The Bhoys responded well to just two days rest and a changed squad last time out, knocking off Partick Thistle 4-1 in large part due to Stuart Armstrong’s brace on either side of the half.

This time out, the Accies come in to Parkhead with just two wins on the season, but 16 points to put them in the running for the top half of the league. Can Celtic cut down those dreams and keep its unbeaten Scottish season alive?

Of course the first bit of news is clearly the change in lineup, as Celtic will put together a 3-5-2 formation. Jozo Simunovic returns to the lineup and is likely on the left side along with stalwarts Mikael Lustig and Eric Sviatchenko.

That means an interesting midfield and most importantly, both Griffiths and Dembele up front together. It hasn’t happened often this season and the experiment was abandoned early on thanks to injuries and the form of Dembele alone up top.

However, Girffiths’ performance over the last few matches pushed the manager to make this choice. It will be an interesting experiment and if it works out it may spell even more trouble for opposing Scottish foes over the next few weeks here.

Next: Armstrong Becoming Invaluable to Celtic

In the midfield, the usual suspects are all there, but in a different look. Can the tandem of McGregor and Brown get things organized for three in-form players up top of them in Roberts, Rogic and Armstrong?

This side is clearly set up to attack and get the job done early against the Accies. Let’s see if that strategy works and if we’ll see any of the three defensive subs up off the bench quickly should a big lead come for the Hoops.